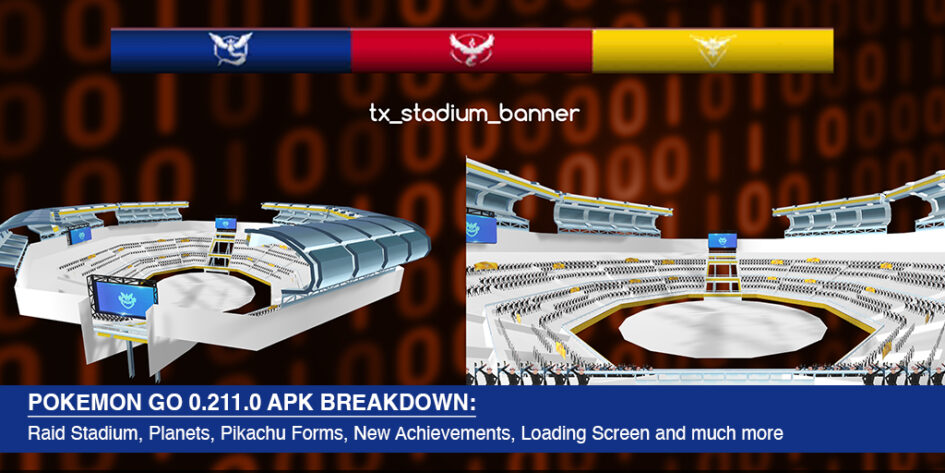 Trainers, A new version of Pokemon GO 0.211.0 is rolling out slowly for Android and Data Miners have found a lot of new upcoming updates and statement this as the largest update so far in terms of code changes and it includes New Raid Stadium, Planets, New Pikachu forms and much more…

Credits to PokeMiners for Data Mine Report, If you haven’t followed them on Twitter, Do follow them, they do incredible work!

Two new Pikachu’s were expected for GO Fest, but miners have found two additional Pikachu forms which might get released during the GO Fest 2021 or later.

Niantic has released images for both Pikachu Pop Star and Pikachu Rock Star.

It also appears that all the GO Fest 2021 Costume Pokemon will not be evolvable including the other Costume forms which are going to be released.

A lots of new badges were found including the GO Fest 2021 Test and Global badge, Raid Stadium Badge and Trading Card Badges.

Get ready for raids, Something new and a big upgrade is coming to the raiding system. From leaderboards, stats and challenges, to a new in-game Stadium with screens to battle.

Currently, it is unknown how and when it will be implemented.

PokeMiners have found a lots of new assets for the Raid Stadium and texts to support in the new APK.

Let’s go with the Assets first to bring up some excitement.

A lots of supporting texts have been found in the new APK.

A lot of new stats now will be stored like a number of charge attacks used, tallest Pokemon and many other parameters.

These are used to help calculate the stats. In addition, raid_player_stats are now stored after every Raid or Gym battle.

The Leaderboard will be used to show off the trainers stats for the raid battle or the complete raid stadium.

Just like gyms, the Stadium can change team colours as well with banners and crowd updates.

Get Ready to brag in raiding groups, New Raid Achievements are coming to Pokemon GO and it seems trainers will be rewarded some achievements at the end of the raid will be presented in the summary screen.

Here are the few achievements texts found by the miners

This probably for the one who dealt the maximum damage in the raids.

To the one who delivered the final attack!

To the one who brought the largest Pokemon. Largest in terms of height?

Be sure to bring your buddy in the raids, this is one for you!

Bringing a Mega Evolution will help in Achievement and Damage Boost!

As you have all guessed, Meloetta will be the Featured Pokemon during the GO Fest 2021. Like all previous fests Pokemon encounters, Meloetta will also be encountered in some different way.

Miners have found some stage assets and texts updates, seems this is where Meloetta will be performing and trainers will have it’s encounter during the GO Fest 2021.

New Planets and Skies text have been added in the update. Are we getting Planets in the sky?

Is Pluto still considered as planet?

New Sky for GO Fest 2021 have been added, We might see different skies during theMeloetta stage performance.

Raid Logging is another massive update in the raid system. Pokemon GO will now log all the activities in raids, which in turn help them to improve the raid system and reduce all sorts of errors.

According to Pokeminers, Following are the activities logged in the Logging System by Pokemon GO/

And Finally, This update comes with a brand new loading screen!