Alolan Forms Are Coming to Pokémon GO and What is Alolan Form? When everyone thought that Niantic would be taking a break from events, they surprise us all by pulling something from their hat once again! The announcement titled: Alolan Forms are coming to Pokemon GO! went live a couple hours ago on Pokémon GO Live and things just got even better in the past hour! Here’s our News Roundup and What is Alolan Form.

Here’s the Original Message from Niantic

“Sunny days are ahead! Whether your forecast calls for rain or shine, we’re celebrating all around the world by introducing some special Pokémon from the tropical Alola region to Pokémon GO. Get ready for some of the Pokémon originally discovered in the Kanto region to appear in their Alolan forms! These unique variants were first seen in the Pokémon Sun and Pokémon Moon video games, and they will make their way to Pokémon GO in the coming weeks. Keep an eye out for news related to this exciting change—and don’t forget to tell your friends! Stay safe, and happy exploring!”

So what are Alolan Forms?

A regional variant is a species of Pokémon found in a specific region that takes on a different form than it does in most other regions. These Pokémon have uniquely adapted to habitats that are different than those where its species naturally live in other parts of the world. As such, many things may be different about them, from their appearance and way of living to even their type, moves, Abilities, base stats and height and weight. This is analogous to peripatric speciation in regards to real-world phenomena, where a population that is isolated from the rest of the species develop unique traits and eventually evolve into a new species. 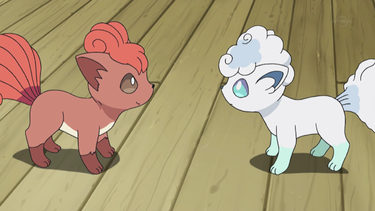 Normal and Alolan Vulpix in the anime

Alolan Forms of Pokémon Originally Discovered in the Kanto Region